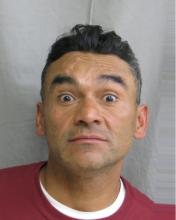 A serial killer who admitted on Friday that he murdered his aunt and uncle in Houston in 2018 also admitted to five other slayings and seven assaults in California in exchange for a sentence of life without parole in California, Harris County District Attorney Kim Ogg announced Saturday.

“This man was a monster who killed strangers and members of his own family without a second thought,” Ogg said. “He choked unsuspecting people to death and bludgeoned others with heavy objects, sometimes while they slept. His callous actions showed that he never cared about anyone else.”

Ramon Escobar, 50, pleaded guilty to the deaths of his uncle, Rogelio Escobar, and aunt, Dina Escobar, in a crime spree that began Aug. 26, 2018.

First, Escobar killed his 65-year-old uncle using an old police baton because he felt disrespected. The uncle had taken Escobar in and was letting him live at the home on Prudence Drive in southwest Houston. Then, the defendant’s 60-year-old aunt went looking for her brother in her van. Escobar hid under a pile of clothes in the van and then tried strangling her from behind with the baton. The two struggled to the ground, and he pressed his knee to her chest until she stopped breathing. Her burned-out van was found on a beach near Galveston. The aunt and uncle’s remains were found in a landfill.

After detectives with the Houston Police Department interviewed Escobar about his uncle’s disappearance, he fled to Santa Monica, California.

A month later, police there arrested him in the beating deaths of at least four homeless men. He told Los Angeles Police Department detectives about all of the deaths. Details from that interview were included in court documents for a capital murder charge.

Escobar was not extradited to Texas. On Friday, he appeared by Zoom from a Los Angeles County courtroom to accept a plea deal to the charges. When asked for his plea in his aunt’s case, Escobar said he was “very guilty.”

Harris County Assistant District Attorney Robert Buss said Friday’s plea deal ensures that Escobar will not be released from prison in California and if he ever is, he will have to serve two life sentences in Texas, which gave the victims’ families some closure.

“He was brutal,” Buss said. “The families wanted to see him go away.”